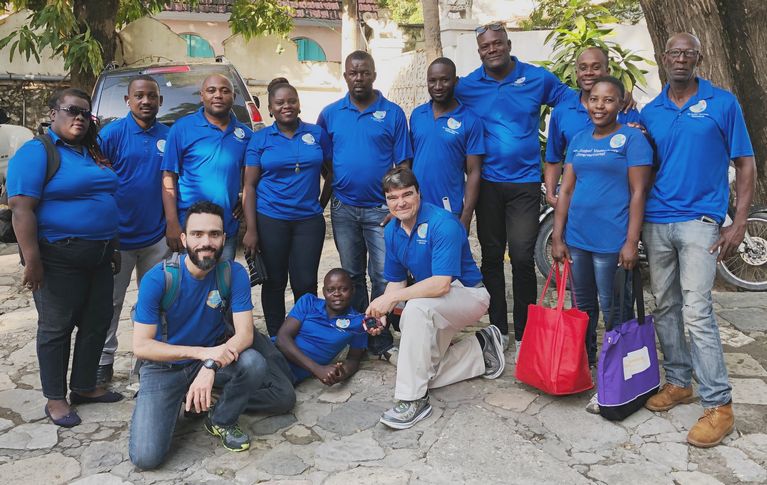 Because of recent civil unrest in Haiti, there was some concern about security, so planned participants Dr. Briana Oster and Greg McDonald from Denver postponed until September. But they had already provided contributions and were gracious enough to let NSVI use their donations toward this mission, without which we would not have had enough funds to cover mission expenses. So NSVI is very grateful to them for making this mission possible. 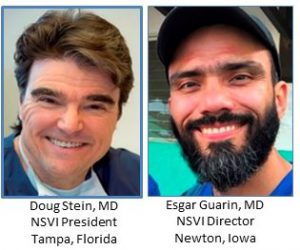 As a result, Doug Stein and Esgar Guarin were the sole international participants, but our Haitian Drs. St-Vil and Mesadieu are so efficient that we were able to accomplish 147 procedures (at least 8 of which required hydrocele drainage), begin the training of Dr. Compere, and continue the training of Drs. Trevant and Dugue. 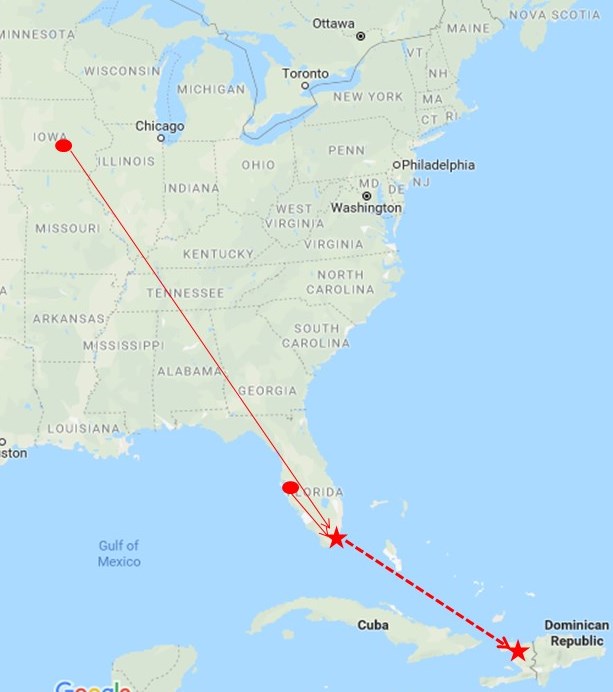 Coming from a small town in Central Iowa, Dr. Guarin paid his airfare, room & board, a portion of the vasectomy fees, AND his accommodations in Miami on the night before departure and the night of our late-day return. What a sacrifice! 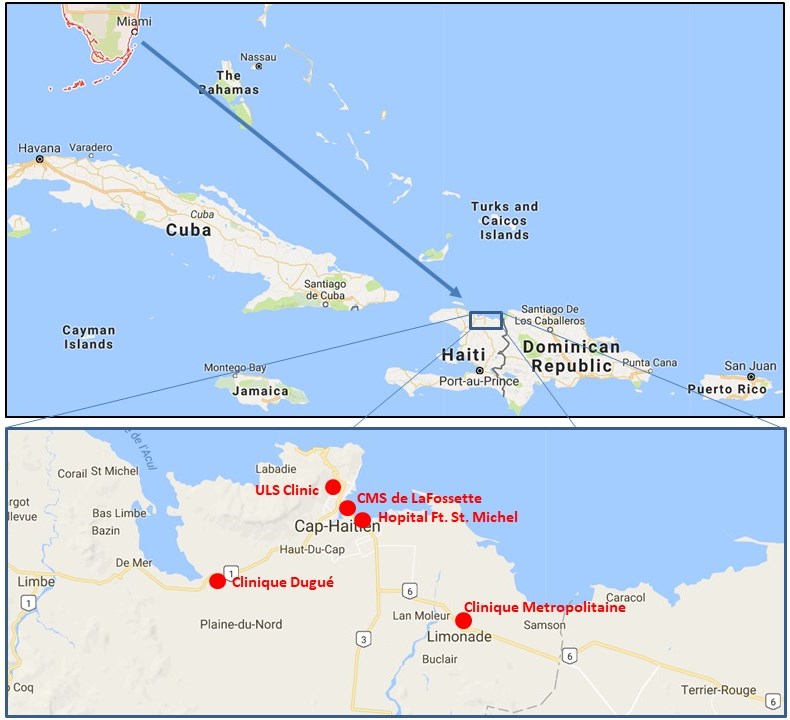 We provided vasectomies at 5 locations, thanks to the facility hosts below.

Over the past few years, NSVI missions to Haiti have nearly all been Wednesday to Saturday. But American Airlines has tapered flights from Miami to Cap-Haitien to 4 flights per week: Sun-Tue-Thu-Sat. So we decided to try Thursday to Sunday, unsure whether men would be receptive to getting vasectomies on Sunday morning before our return flight left at 2:11 PM, or whether our Haitian staff would want to work on Sunday. But it worked out fine: our Team was eager to work on Sunday and plenty of men came for their procedures. 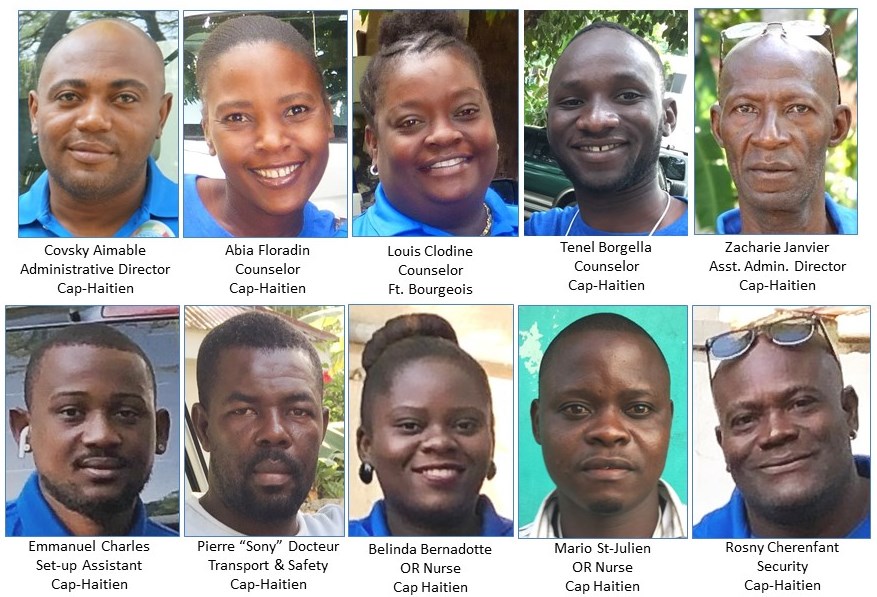 Thursday June 27:
Arrived in Cap Haitien on American Airlines #2732 around 2 PM. Before we arrived, our Haitian Team brought our stored supplies (tables, Mayo stands, and some equipment) from the Cap Haitian Health Network (CHHN) office to Hopital Ft. St. Michel. We performed 16 vasectomies, continued to train Dr. Trevant, and began to train Dr. Compere. We spent the evening at Hotel Roi Christophe, where we organized supplies.

Friday June 28:
Drs. Guarin and Mesadieu performed 23 vasectomies at Dr. Mesadieu’s ULS Clinic in Ft. Bourgeois , while Drs. Stein, St-Vil and Trevant went to the Dugue Clinic in Plaine-du-Nord. Because of a communications mix-up related to the postponement of this mission from the first week in June, only 2 vasectomies were performed at the Dugue Clinic. So the team went to the Complexe Medico-Social de LaFossette (CMS LaFossette) to evaluate the site in preparation for June 29. Director Dr. Antoni Constant gave us a warm welcome and the procedure room was terrific. There were at least 100 women waiting for their prenatal visits, so we provided a presentation about vasectomy and distributed brochures for them to take home to their partners.

Saturday June 29:
Drs. Guarin, St-Vil and Trevant performed 20 vasectomies at Dr. Saint-Vil’s Clinique Metropolitaine in Limonade, while Drs. Stein, Mesadieu, and Compere performed 36 vasectomies at the Complexe Medico-Social de LaFossette in Cap-Haitien. Then we met at the Hopital Ft. St. Michel (HFSM) and completed another 22 vasectomies. When finished there, we simply locked the door so we could continue on Sunday morning without having to set up again. We paid all staff for the cases performed so far.

Sunday June 30:
28 vasectomies at HFSM in Cap-Haitien until 12:00, at which time we departed to get the 2:11 PM flight back to Miami. As the other doctors worked, I paid the staff for Sunday and divided supplies and equipment into (1) those that we donated to our domestic teams, (2) those that stayed in Cap-Haitien for the next NSVI mission, and (3) those that I brought home to the USA.

On FRIDAY morning, the Dugue Clinic (left) was quite quiet when we arrived. 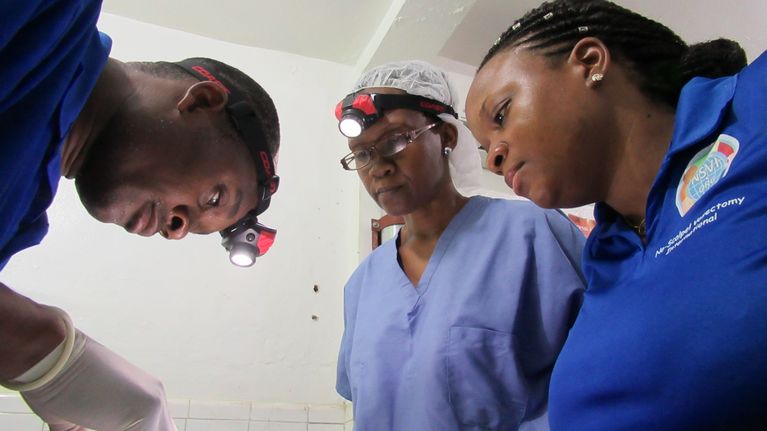 Madame Dugue explained that 26 men had come in early June on our original date. Communication challenges thwarted efforts to reach them about the change in dates. But two patients provided an opportunity for Dr. Saint-Vil to demonstrate his fine technique to trainee Drs. Trevant and Dugue. 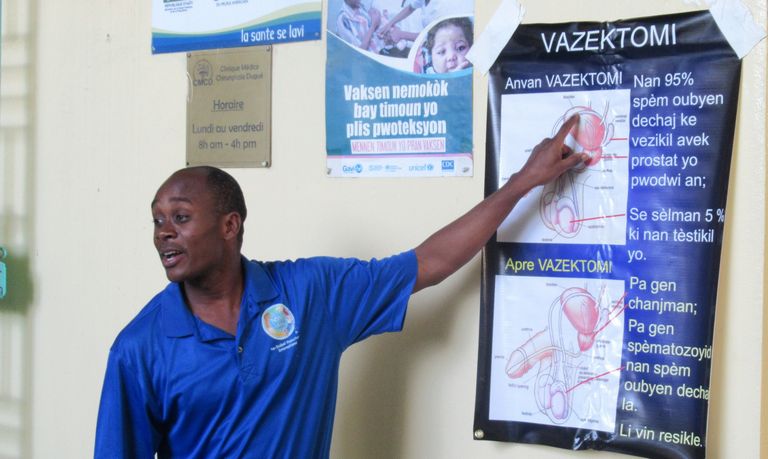 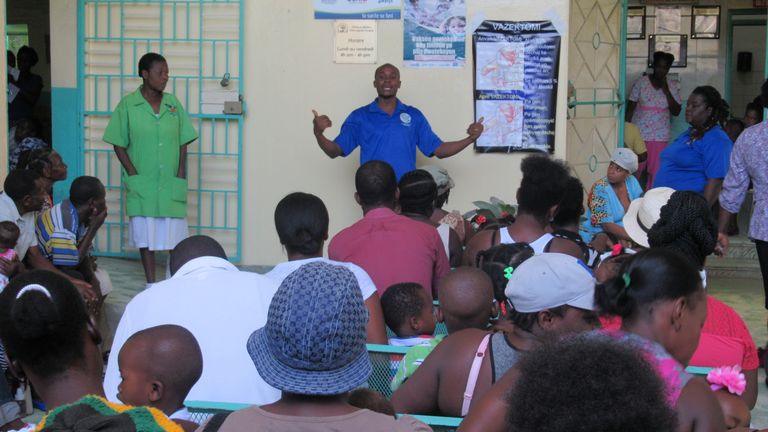 … to explain vasectomy to a large group of women who had brought their infants for immunizations. 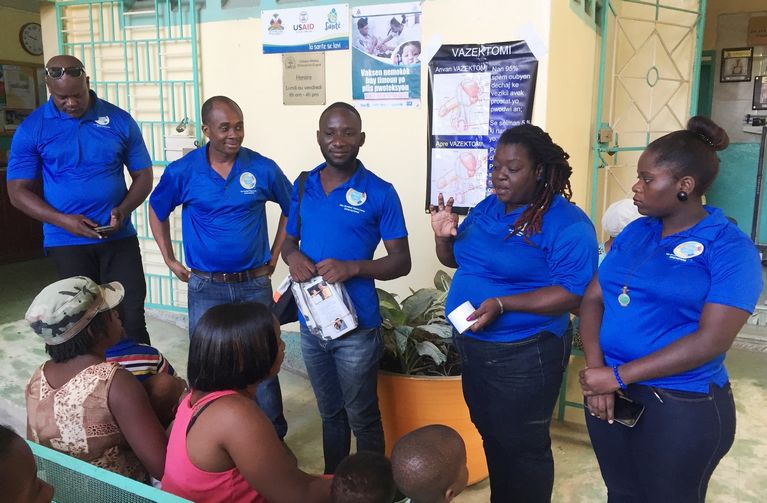 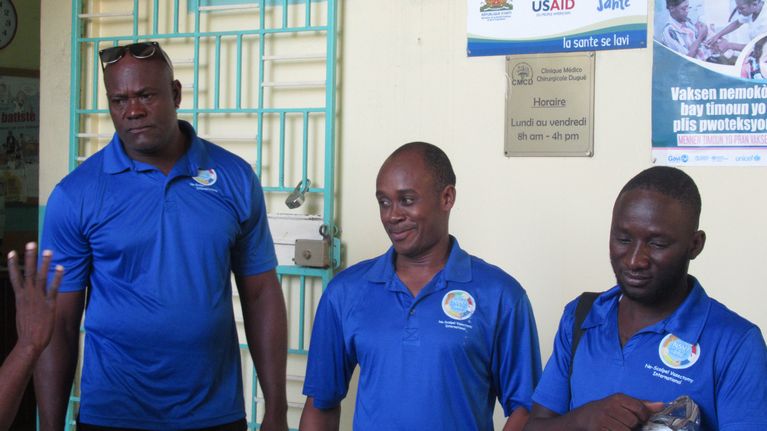 … and answered questions. Brochures were distributed and all listeners were made aware of our return on September 13. 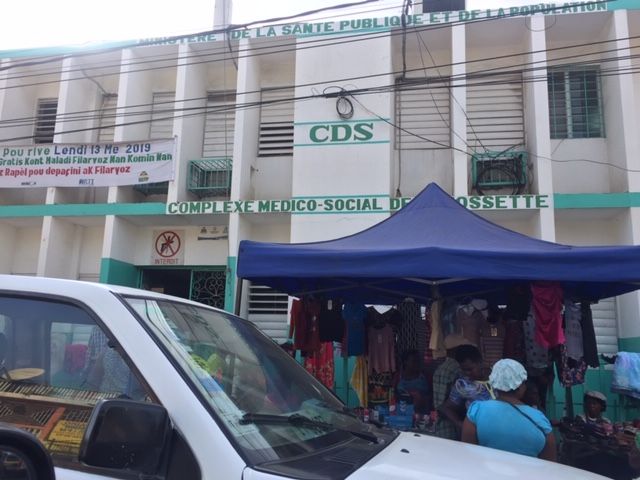 At the invitation of Dr. Antoni Constant, we then went to the Complexe Medico-Social de LaFossette right in the center of Cap-Haitien on one of its busiest streets. It turned out that our procedure room on the second floor faced the noisy street … 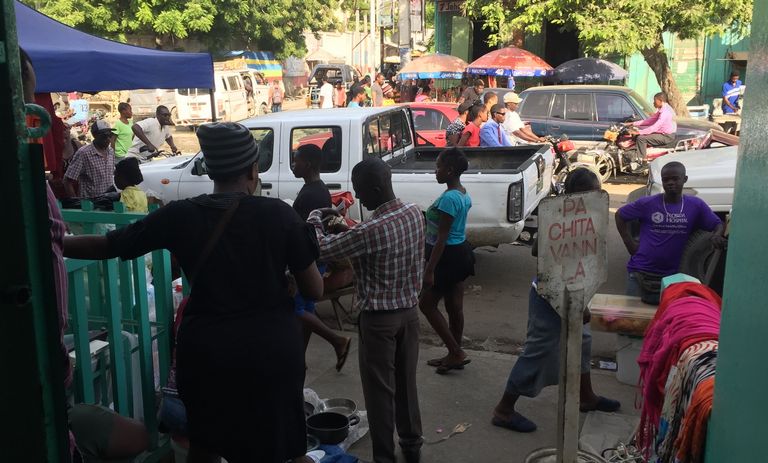 … but it presented a great opportunity to distribute more brochures to educate the public about vasectomy. 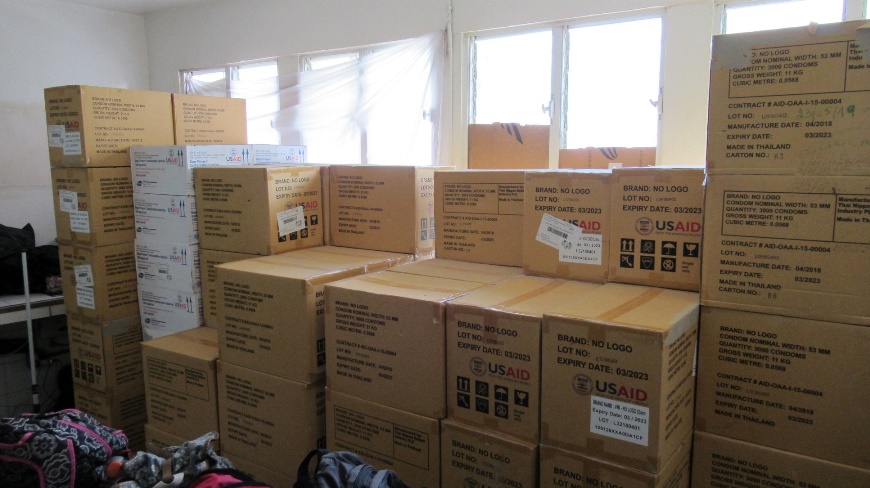 Our procedure room was full of over 100,000 condoms and thousands of Depo shots, but it was spacious and air conditioned, and empty when we returned the next day. 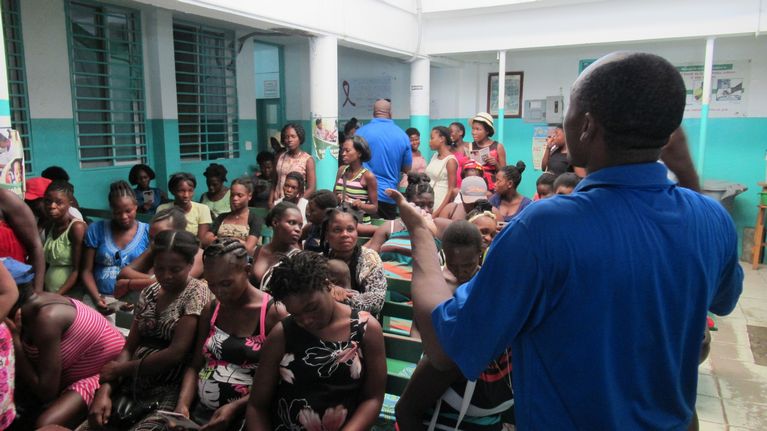 Downstairs, the clinic was completely full of women waiting for their prenatal visits, an audience eager for anything to break the boredom. 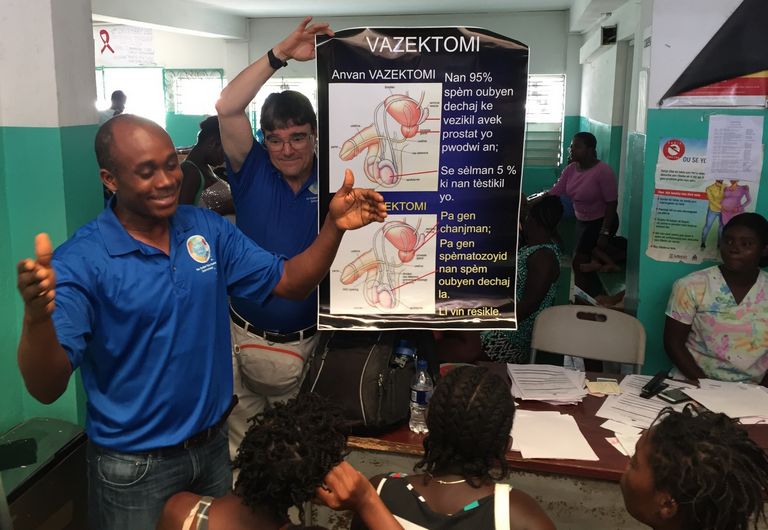 And Dr. Saint-Vil did just that. While Rosny distributed brochures and I held our educational poster. Classaint entertained and educated. 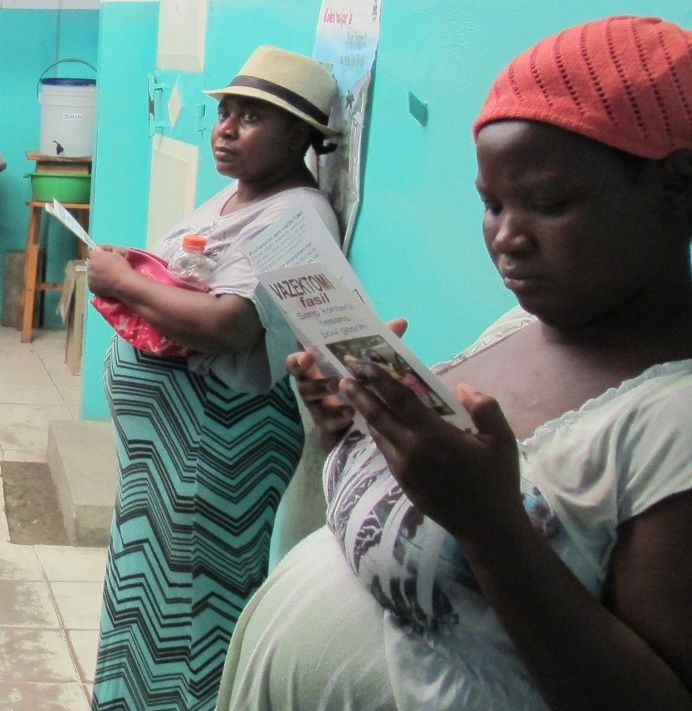 For some listeners, it was the first time they had ever heard about vasectomy. Not a bad idea! 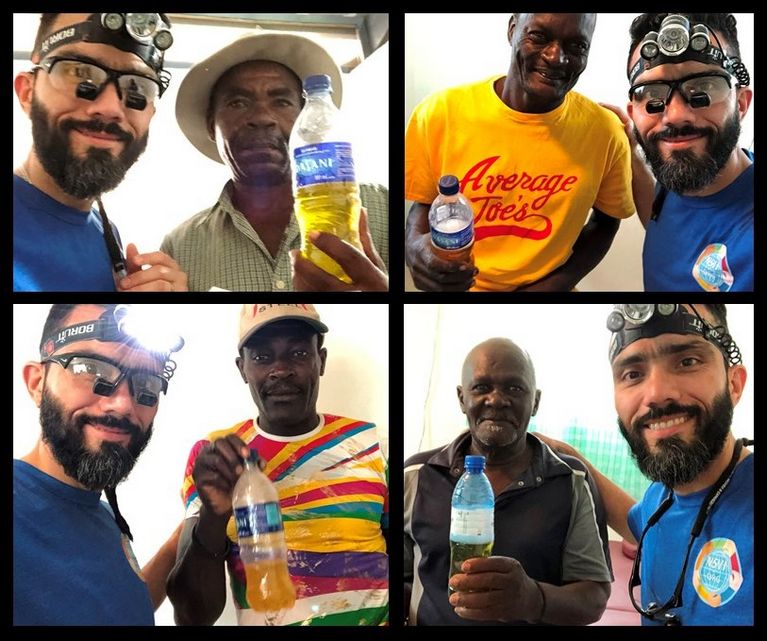 MEANWHILE, Dr. Guarin was in Ft. Bourgeois at Dr. Mesadieu’s ULS Clinic. That is where he was crowned hydrocele king of Haiti. They seemed to follow him everywhere … giant scrotums begging to be drained. But hydrocele drainage doesn’t make vasectomies easy. The cord structures become thickened after years of reaction to the hydroceles. So Dr. Guarin was exhausted by the end of the day and more than ready for a Prestige and a dip in the hotel pool. 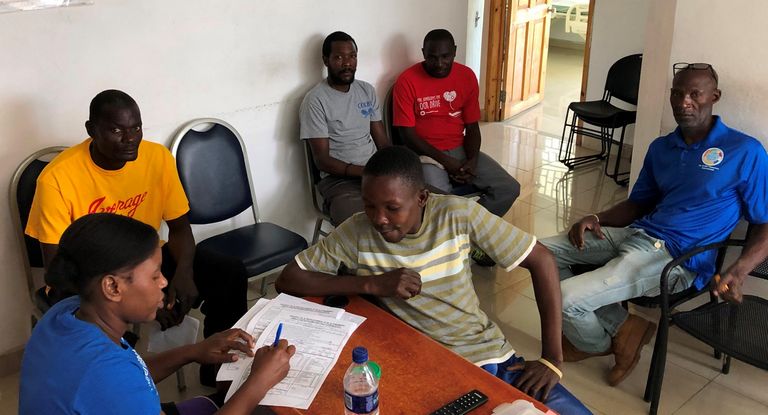 On SATURDAY morning, Dr. Guarin had a more relaxed schedule at Dr. Saint-Vil’s Clinique Metropolitaine in Limonade. Here Abia compiles demographic data and makes sure that consents are understood and signed, while Zachary supervises. 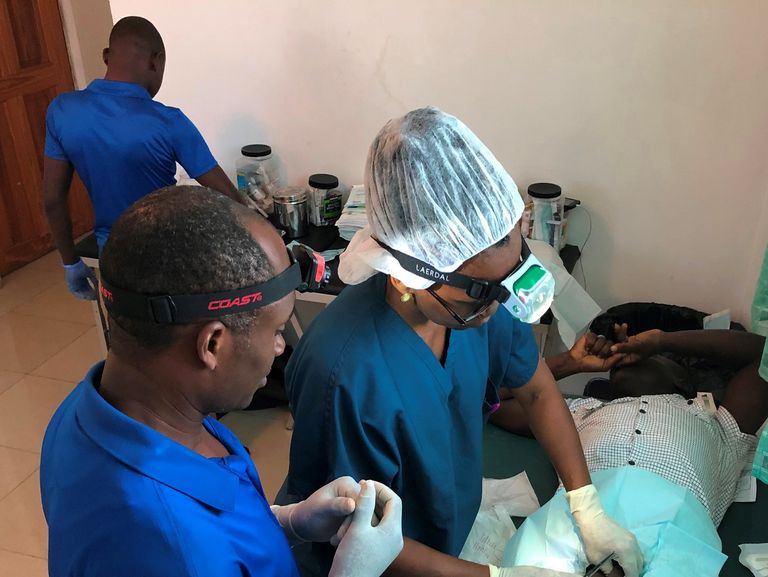 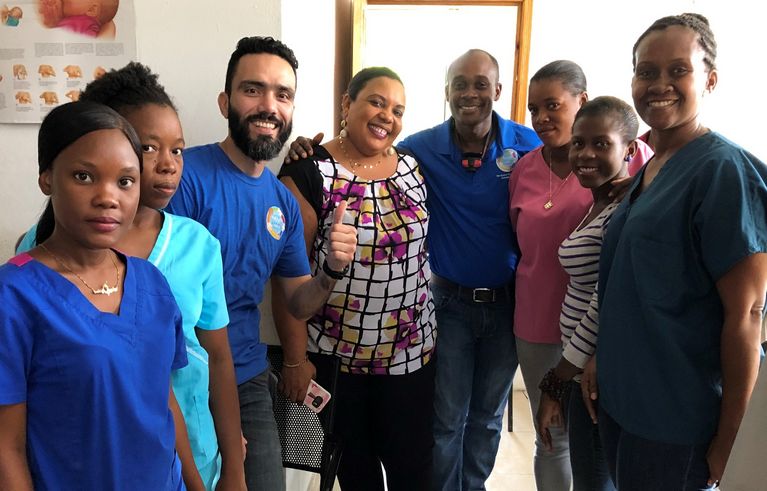 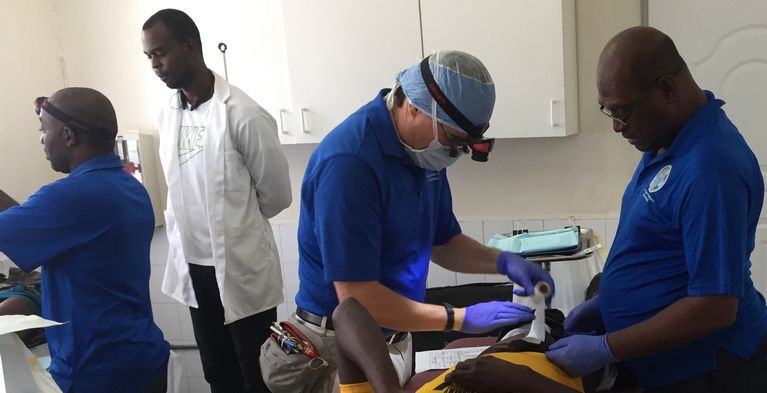 MEANWHILE, at CMS LaFossette, Drs. Maudelin and Stein are confronted with 36 patients, thanks to the presentation by Dr. Saint-Vil the day before. There isn’t enough time for in-depth hands-on training, but Drs. Karl Darbel and Compere Avrius are exposed to many patients by observation and palpation. 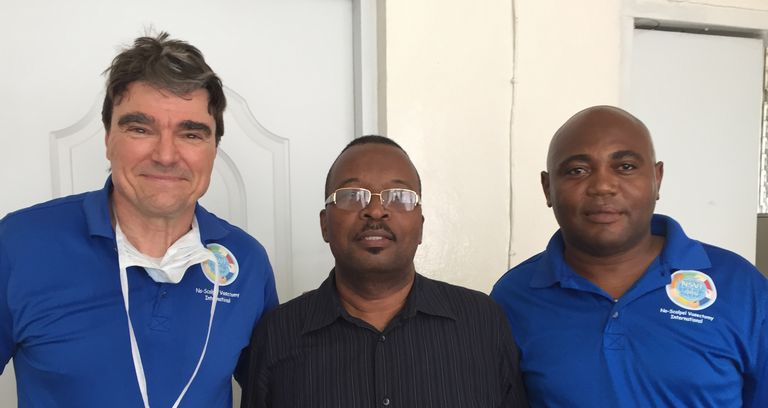 If Dr. Constant invites us, NSVI will surely return to CMS LaFossette in September.

On Saturday afternoon, both teams went to Hopital FSM. It is so convenient that we just lock the door and return for our final day before heading to the airport nearby. With so much manpower in one place … 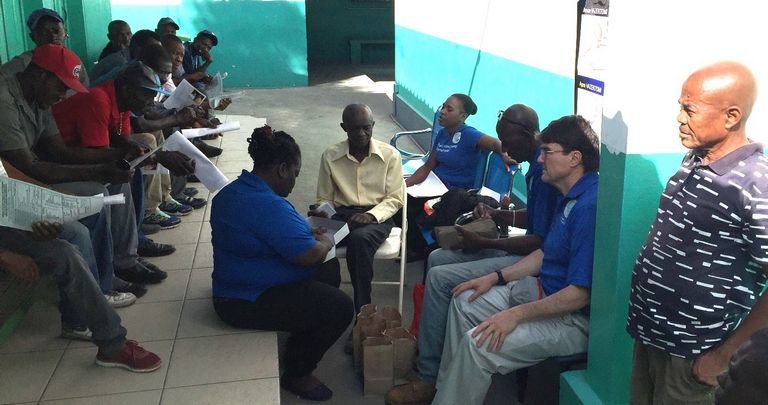 … I was able to sit outside and monitor the registration, consent, and preparation process. All men received 500mg of cephalexin pre-op, and a goody bag containing … 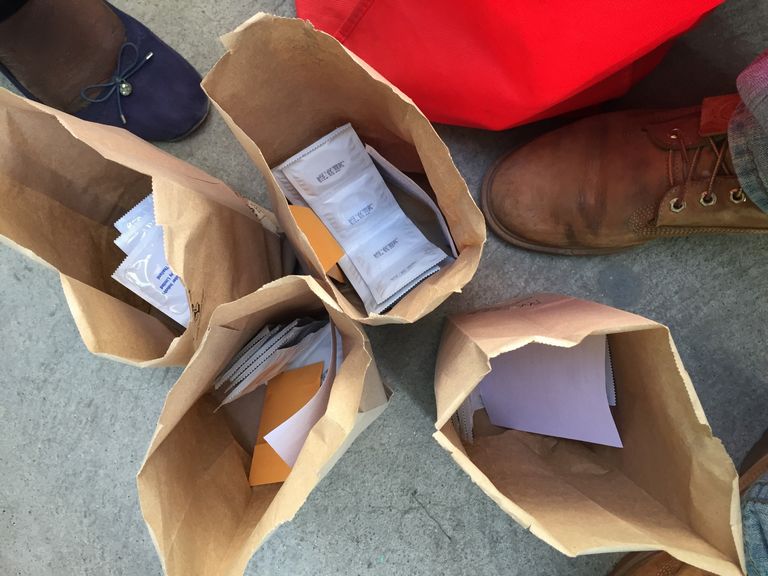 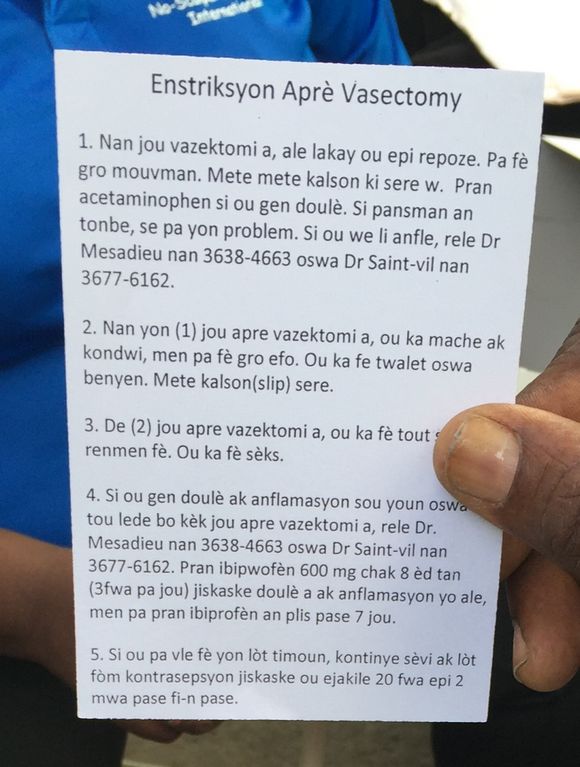 … and complete post-vasectomy instructions with the phone numbers of Drs. Mesadieu and Saint-Vil. 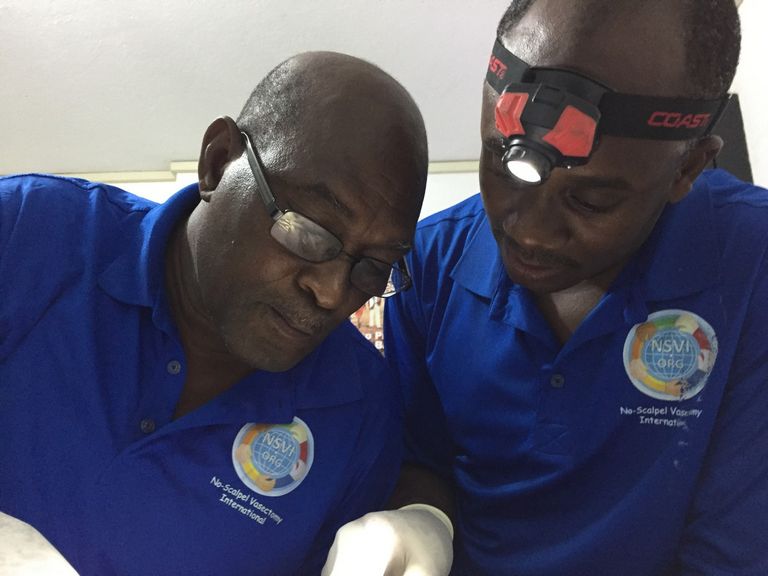 Drs. Compere and Trevant were so dedicated to learning vasectomy that they returned every day, including Sunday. 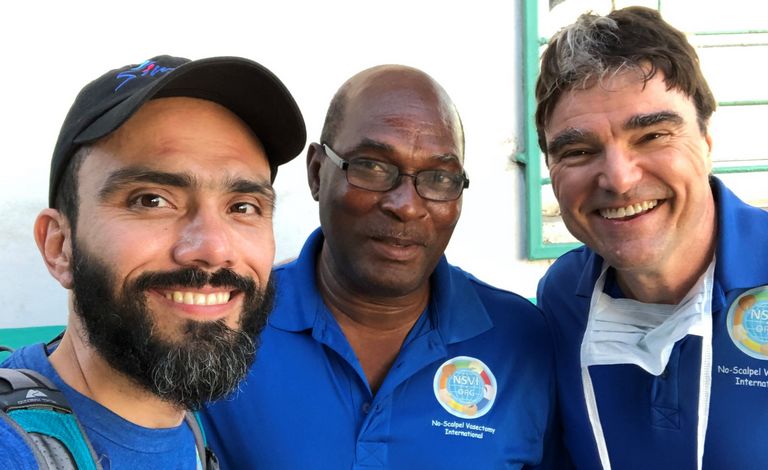 They both hope that with a little more practice, they will be able to lead NSVI’s 3rd and 4th Domestic Teams in Northern Haiti. We hope to see them both again when we return to Haiti September 12-15.