If this is your first visit to NSVI.org, you might want to start with our Mission Statement.

On Nov 30 and Dec 1, 2022, the Team of International Doctors will be Baguio. For contact info, please see the poster below. 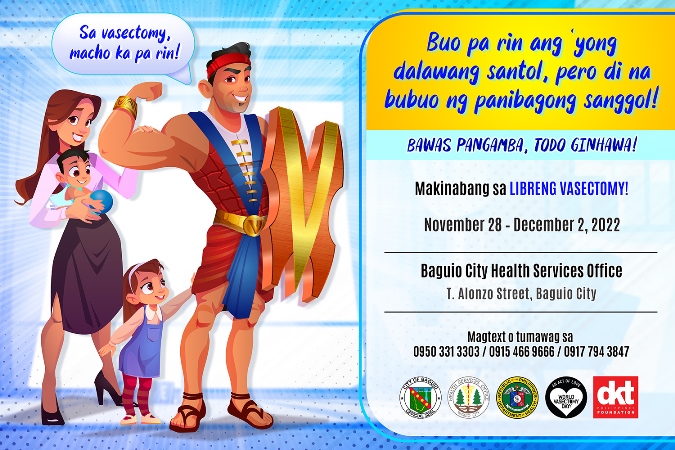 From March 2000 to May 2021, five missions to Haiti and one mission to the Philippines were cancelled due to safety concerns and travel restrictions imposed by COVID-19. But missions resumed in May 2021 as increasing numbers of doctors were fully vaccinated. Please see the May 2021 mission HERE. Then in July 2021, another blow. With the assassination of the President on July 7, the country was thrown into political and economic turmoil, fuel shortages and kidnappings. So missions planned for September and November were cancelled when the situation failed to improve.

Nonetheless, our Domestic Team led by Dr. Maudelin Mesadieu has continued to provide vasectomies in Northern Haiti. Their productivity through 2021 is shown at the bottom of the chart within our Domestic Program page and in the graph that follows.

We still have tentative dates for missions in 2022, listed HERE, and we hope that peace and stability are restored soon.

Five missions to Haiti and one mission to the Philippines were cancelled due to safety concerns and travel restrictions imposed by COVID-19, but missions resumed in May as increasing numbers of doctors were fully vaccinated. Please see the May 2021 mission HERE and our schedule HERE. 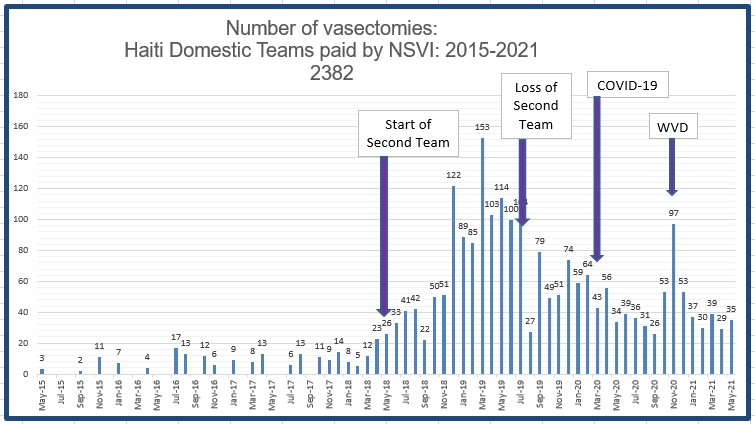 Despite no international missions to Haiti from Dec 2019 until May 2021, our Domestic Team continued to provide vasectomy counseling and procedures with the financial support of NSVI:

On two occasions (March and November, click for details), the Haitian staff that supports our International Missions joined our Domestic Team for 2 particularly productive series of 3-4 consecutive days.

The Founders and first Board of Directors of NSVI have effectively served since 2002. They have tirelessly run missions to provide FREE NSV (No-Scalpel Vasectomy) in developing countries with high rates of unintended pregnancy, they have supported NSVI’s Domestic Teams, they have handled all of the financial and record-keeping duties required of a non-profit corporation, and they have donated generously from their own personal funds.

Inspirational role models for most people who meet them, Ramon, Nenita, Bob and Benie have made annual missions to the Philippines for 20 years (since 1998), first with the Bisaya Medical Association until 2001, then as “NSVI” with some support from the BMA. Since I joined NSVI in 2010, Ramon has traveled with me on 29 international vasectomy service and training missions to Philippines, Kenya, Haiti, Indonesia, Cuba, and Mexico; played a key role in 5 World Vasectomy Days; and helped train dozens of vasectomists worldwide.

Now in their 80’s, health issues have made travel more risky and obligations more daunting. So they have decided to hand over the reins to new leadership but continue to serve an advisory role as an Emeritus Board. Given my role as Director of Development since 2012 and John Curington’s role as Director of Education since 2016, the Board nominated me as President and John as Secretary-Treasurer, and we gladly accepted. So, on June 22, in the Naples home of Ramon and Nenita Suarez, papers were signed … 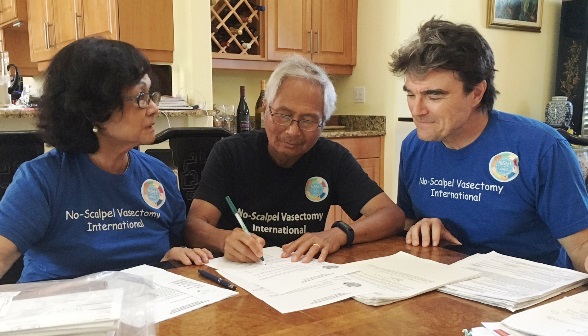 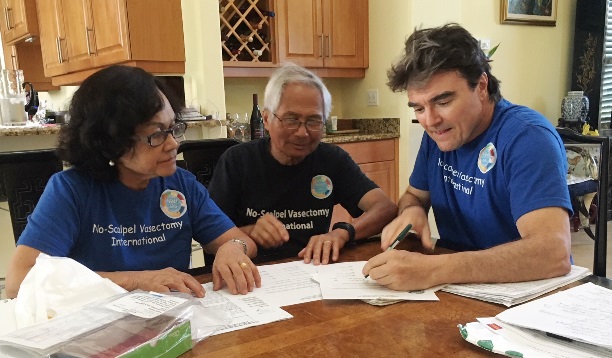 … under the watchful eye of Ramon and Nenita’s grand-daughter Maya. 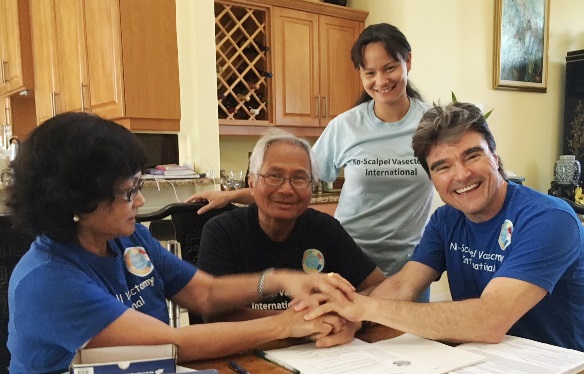 We joined hands, and Doug Stein and John Curington became President and Secretary-Treasurer of NSVI. 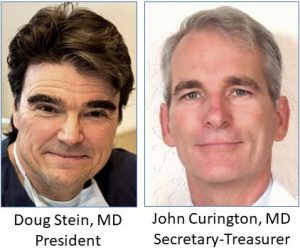 The transition has involved a transfer of the NSVI non-profit corporation from Pennsylvania to Florida, acquisition of a new accounting firm in the Tampa area, and transfer of management of the NSVI Wells Fargo and PayPal accounts from Ramon to myself. Over the next few months, the Emeritus Board, John and I will nominate others to the Active Voting Board and to a more expansive Board of Advisors.

Our goal is to continue the legacy of our Founders and try to match their spirit, energy and vision so that NSVI lives on through generations.

See the vasectomists who are volunteering their own money and time to help men in developing countries (1) share with their partners the responsibility for family planning and (2) better nurture the children that they already have. Those committed vasectomists are listed HERE.

Click any ink at the right to view past or upcoming vasectomy missions or to learn about the Domestic Teams that provide quality vasectomy services between our missions. 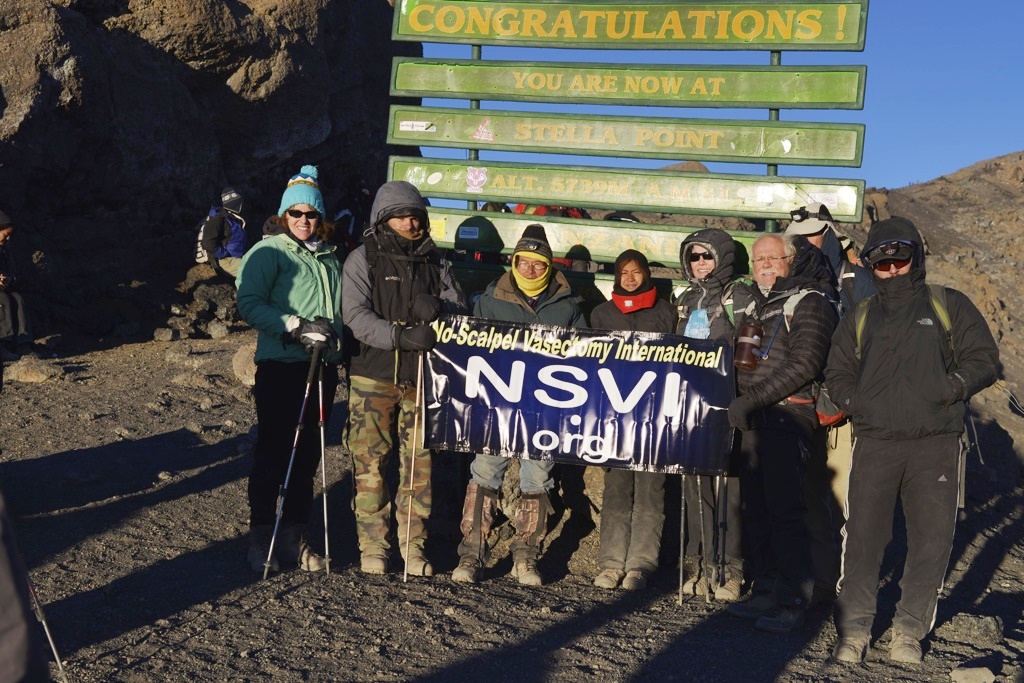 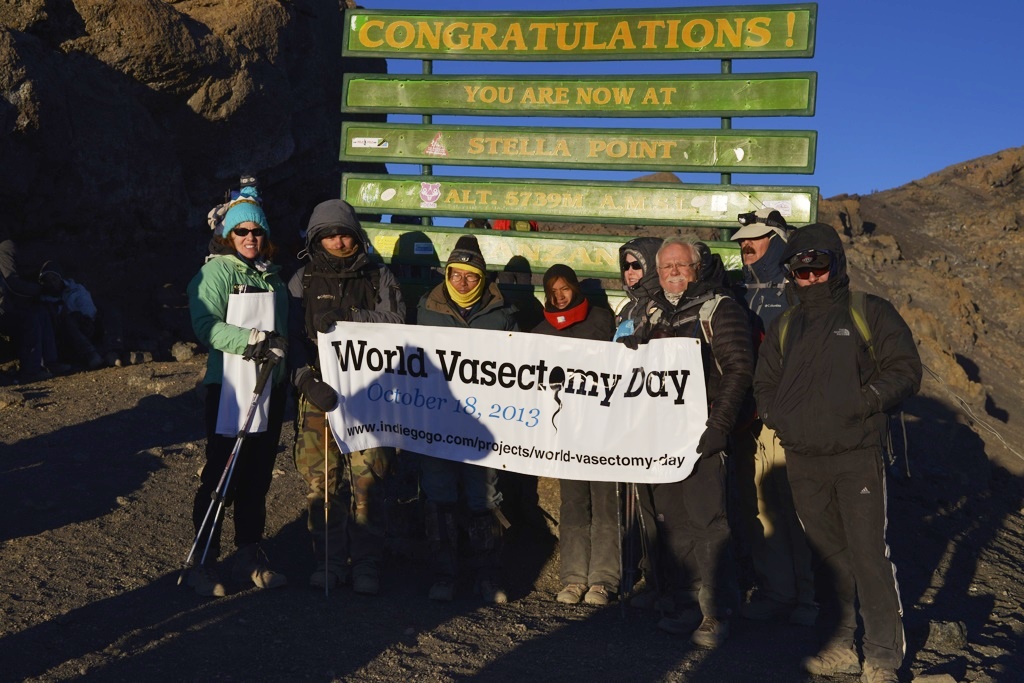