By: Bob Kiamco, Chairman and CEO

Our mission sites in the Philippines were at Sacred Heart Hospital and Visayas Community Medical Center both in Cebu City; Hilongos, Leyte; and Sindagan, Zamboanga in cooperation with the Bisaya Medical Association.

Moreover, we received a tremendous boost in “publicity”. Jonathan Stack, founder of Gabriel Films (http://www.gabrielfilms.com) and his crew joined us to document all aspects of our missions in the Philippines and Haiti. “Gabriel films” is an award-winning, independent documentary film company specializing in social issues. Footages were taken to make sure all opinions about “Family Planning” such as: from the general population, Church Leaders, Government officials, advocates for and against were recorded. Our footage will be part of their documentary on Male Involvement in Family Planning and World Population Issues.

Dr. Doug Stein has firmly established himself as one great addition to our foundation. His enthusiasm for NSV spills over to everybody around. He does not take “no” for an answer and most of all, he is truly dedicated to the prevention of unwanted pregnancies. To learn more about Dr. Stein, please visit vasweb.com.

To recruit more patients, Dr. Doug Stein paid out of his own pocket $3,000 worth of billboard ads in Cebu City. This included the huge tarps and rental of space. Unfortunately, the advertising company was intimidated by the Church and displayed the billboards for only a couple of days instead of the agreed 30 days. Nevertheless, they were effective. After much haggling, most of the rental payment was refunded.

We are proud to announce that we have another Suarez in our team. He is Dr. Ronald Suarez from New York, the son of Drs. Ramon U. and Nenita L. Suarez. He is our new Vasectomist.

We also re-visited the Bisaya Medical Association’s “Gawad Kalinga” project (poor people’s housing) in Talisay. Due to pressure from the religious group “Couples for Christ” we could not conduct NSV inside the housing project but the barangay officials led a dozen patients to our mission at Sacred Heart Hospital.

We are very appreciative of our members/volunteers in the Philippines, who are very skilled and dedicated to our mission. We wish to thank them. They are: Dr. Joseph Alesna; Mrs. Myrna Danuco, R.N.; Mrs. Frohnie Cagalitan, M.S.W. and spouse Ed; Apolinar Suarez; Ms. Nela Suarez and Mrs. Delia E. Kiamco. They make our mission in the Philippines possible and they continue our mission and represent our ideals when we come home to the US.

We ask for your continued financial support.

No Scalpel Vasectomy International Inc. is a non-profit 501(c)(3) corporation. All donations are tax deductible to the extent allowed by law.

Before Dr. Stein was comfortable with the use of WordPress, the program used to design this NSVI site, he found it easier to summarize the 2011 NSVI Mission to the Philippines on his own website. So rather than duplicate all of that work here on the NSVI site, we ask that you simply click the link below to open another window and read about vasectomy in the Philippines:

2011 NSVI Mission to the Philippines

Here is one picture during our 2011 mission. 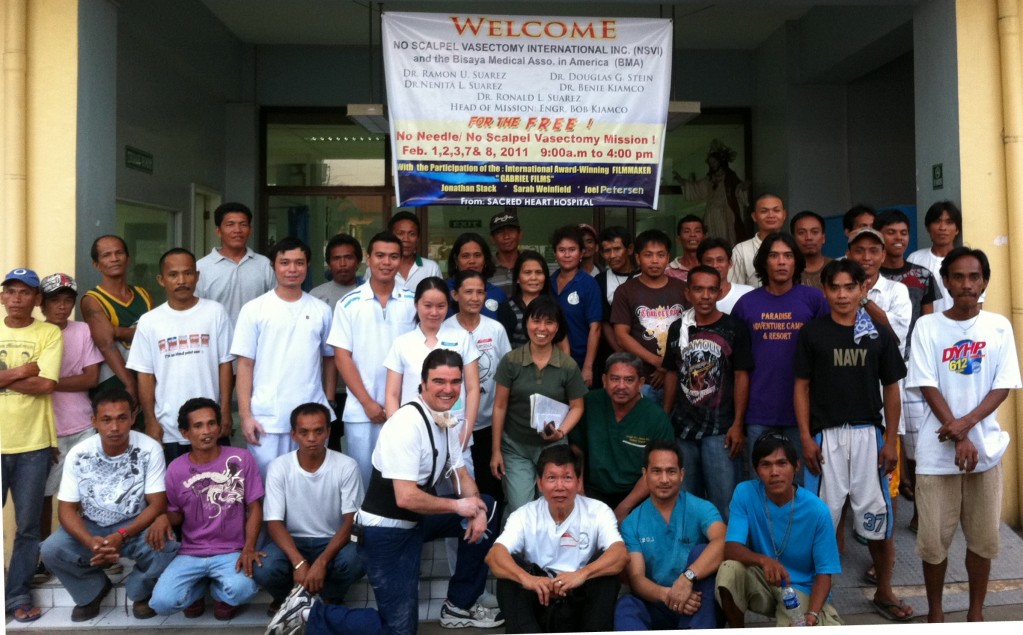 All those guys in one day? That’s just the afternoon! The morning men have already gone home!