Introduction to No Scalpel Vasectomy International, Inc. (NSVI) & Vasectomy Missions in the Philippines

At the American Urological Association Annual Meeting in Orlando in May 2008, I met Ramon Suarez, MD (Diplomate of the American Board of Urology) when we both attended a luncheon meeting of the Society for the Study of Male Reproduction. Ramon is a Filipino-American who practiced urology for many years in Pennsylvania. He became fond of Naples, Florida during vacation visits and ultimately retired there. For many years, he has participated in medical mission trips to his native country, trips sponsored and organized by the Bisaya Medical Association (BMA). The Philippines has a population of 108,000,000 distributed among over 7000 islands with a cumulative land area similar to that of Arizona; that’s right, about 1/3 the population of the United States living in an area slightly larger than that one state. So Ramon has recognized a need for family planning services, despite some resistance from various church and government leaders in this largely Catholic country. Vasectomy and tubal ligation work particularly well in population groups who may not always have access to less dependable alternatives, who may not be able to afford the alternatives, and who may not be optimally compliant with those alternatives when they are available and provided without cost. If the Philippine population is equally divided among an 80-year life expectancy (a stretch, but it makes the math easy), then there are over 1,000,000 people in each age group, 500,000 “couples” in each age group. Which means that every year, 500,000 couples reach the stage at which they feel content with the number of children that they already have. If most of the women are 15 years pre-menopause, then what does the couple do for the next 15 years? Vasectomy provides an easy and dependable solution, but if only half of those couples choose vasectomy, that still leaves a workload of 250,000 vasectomies per year to prevent the unintended pregnancies that routinely occur after couples decide that they have had enough children to feel fulfilled as parents. Working full time at 20 locations in Florida, I perform about 2,500 vasectomies per year. Which means that the Philippines would need 100 energetic vasectomists working tirelessly to provide the service to just half of the couples who have as many children as they desire.

Ramon invited me to join him on his 2010 vasectomy mission. He and friend Robert “Bob” Kiamco, MSME, a professional engineer, and their physician wives, Nenita Suarez, MD (Board Certified in Internal Medicine and Pulmonary Diseases) and Benita Kiamco, MD (Board Certified in Pediatrics), had formed a not-for-profit organization called No-Scalpel Vasectomy International (NSV International), incorporated in the state of Pennsylvania in May 2002. Ramon served as President, Nenita as Vice-President, Bob as Chairman of the Board and Director of Missions, and Benita as Secretary-Treasurer. Through donations from generous supporters, they were able to purchase NSV instruments, train local doctors, and provide vasectomy services free of charge in areas of the Philippines where the need is greatest. These services are still provided (1) year-round by Dr. Joseph Alesna at the Department of Reproductive Health of Southwestern University College of Medicine in Cebu City, and (2) during annual vasectomy missions to various cities in the Philippines (see map below). 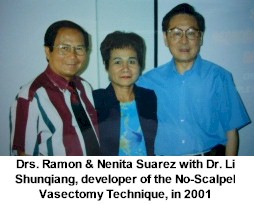 Dr. Suarez was one of the first American urologists to perform the no-scalpel vasectomy technique. After hearing about the new technique, developed in China, at an American Urological Association meeting in 1989, Dr. Suarez took it upon himself to go right to the source. He traveled to China in September 1990 and was trained and certified by Dr. Li Shunqiang, the inventor of the NSV instruments and developer of the technique. Upon his return to Pennsylvania, he trained local physicians and urology residents in South-central Pennsylvania and at the Milton S. Hershey Medical Center in Hershey, Pennsylvania (affiliated with the Pennsylvania State University College of Medicine Department of Surgery). Eleven years later, during a second visit to China in 2001, Dr. Suarez visited Dr. Li to express his appreciation for the technique that had by now become an American standard.

As a medical student in Cebu City in the early 1960’s, Dr. Suarez had met Robert “Bob” Kiamco when they were dating the women who would ultimately become their wives. They became lifelong friends and met regularly after Ramon emigrated to Pennsylvania and Robert emigrated to Chicago. In 2000, Bob and his wife Benita joined Filipino-American physician friends in their hometown of Chicago on a medical mission to the Philippines. In Davao, Mindanao, Bob was impressed with a seemingly endless line of patients waiting for care and realized that medical manpower would always be woefully inadequate if they could not address the population explosion. Later in the year 2000, and a decade after Dr. Suarez had developed an appreciation for the ease and simplicity of NSV, Bob met Ramon at a conference of the Bisaya Medical Association (BMA) in Chicago. They decided that it was time for an independent mission dedicated to family planning through vasectomy. They recognized the key role that NSV could serve in addressing the need for better family planning in developing countries. Using their own personal funds, the two men and their physician wives organized the first-ever vasectomy mission to the Philippines in 2001. As point man, Bob would use his organizational skills to disseminate information and educate the Filipino people about the personal, social, and economic benefits of NSV, not to mention the myriad health benefits including reduced infant and maternal mortality rates, reduced illegal abortion rates (in a country where abortion is illegal), and reduced rates of infant abandonment. (In the Philippines, as in many other developing countries with a shortage of medical services, the main cause of death in women ages 15-35 is complications of pregnancy and childbirth.) Ramon would follow with his surgical skills, surprising Filipino men with the ease and simplicity of NSV.

That first mission, in 2001, was in Cebu at Sacred Heart Hospital, owned by Southwestern University College of Medicine, where Ramon, his wife Nenita, and Bob’s wife Benita earned their medical degrees. Dr. Lydia Aznar Alfonso, the Director of Sacred Heart Hospital, was a personal friend and very receptive to the idea of a vasectomy mission. (In the 70’s, she had spearheaded family planning so enthusiastically in the Philippines that she was excommunicated from the Catholic Church.) She promoted awareness of both NSV and the pending mission of these two Americans, she volunteered free use of the hospital facilities, and she arranged the assistance of Registered Nurse Myrna Danuco to help Bob counsel and organize the patients. When Frohnie Cagalitan, MSW, who had dedicated so much of her professional career to Family Planning, heard about the NSV mission, she volunteered her services and has been with every mission since the first.

During that first mission in 2001, Ramon performed nearly 100 vasectomies, and during a second mission in February 2002, he performed over 100 vasectomies. The modus operandus was established, but Ramon, Bob, Nenita, and Benita needed a broader base of support. So with the help of a carefully chosen accountant and attorney, they formed a non-profit charitable organization under 501(C)(3) of the Internal Revenue Code and called it No-Scalpel Vasectomy International, Inc. (NSVI), so that they could formally receive the donations of enthusiastic supporters. Through funding from the United Nations Population Development Program, NSVI was able to invite Dr. Li and his team from China in 2003 to conduct the first-ever Philippine training seminar for NSV, with presentations and missions at three sites on Cebu Island (Cebu City, Carmen, and Minglanilla), contributing to the expert training of nearly 20 vasectomists. One of these doctors was Joseph Alesna, M.D., an independent-minded pediatric surgeon, overwhelmed by a workload that gave him a special appreciation for the importance of a manageable family size. With NSVI on all subsequent missions, he performs not only NSV, but volunteers his other general surgical skills to complement the needs of NSV patients when the occasions arise.

For some geographic orientation and to see where NSVI has worked through the years, please see our Where We Work page.

NSVI now has over 100 donors throughout the US.

Contributions to NSV International, Inc. are used for the following:

Now that you know About Us, our History, and Where We Work, perhaps you would like to Donate Now to enable us to continue and expand our Mission.